This year’s Society for the Advancement of Chicanos and Native Americans in Science (SACNAS) Annual Conference in Los Angeles had a mighty NIMBioS presence: two members of the the NIMBioS leadership team, two postdoctoral researchers, and four SRE undergraduates all participated this year.

“The best thing about my experience at SACNAS was being able to interact with students, professors, and colleagues in the math-biology field. I received valuable feedback from my talk and ideas that I might be able to incorporate on my research,” said NIMBioS postdoctoral fellow Clemente Aguilar who presented his research on computational methods for immunological applications at the annual pre-conference Modern Math Workshop. The workshop, a joint collaboration of NIMBioS and the eight other NSF Mathematics Institutes, highlights the multitude of opportunities available in mathematical research. 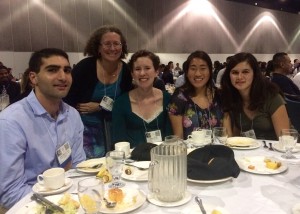 Suzanne Lenhart, NIMBioS Associate Director for Education & Outreach, took a break from promoting the institute’s opportunities to meet for dinner with four 2014 SRE alumni at the conference. The students all received a lot of interest in the posters they presented on their summer work.

NIMBioS postdoctoral fellow Angela Peace spoke about her work during an ecology and evolutionary biology symposium organized by NESCent. “I know from personal experiences that math talks in ecology symposiums don’t always go over so well, ” she said. “However, this audience was very receptive and eager to understand the math. One student even tried to solve one of my differential equations analytically and came up to me afterwards to see if he got it right. Students were actively involved and trying to get the most of out the conference. There seemed to be a constant you-can-do-it-attitude in every conversation.  It was clear that this conference was personal for many people.”

SACNAS’s annual conference is specifically tailored to support undergraduate and graduate students, postdoctoral researchers and career professionals at each transition stage of their career as they move towards positions of science leadership. NIMBioS returns each year to fulfill the NIMBioS mission to support diversity in math and biology and to spread the word about our opportunities to build community connections.