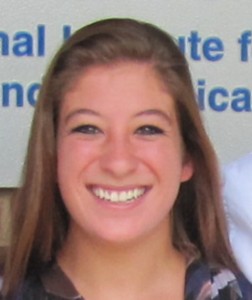 Congratulations to 2013 NIMBioS REU student Nicole Bender for receiving a 2014 Mathematical Association of America Outstanding Poster Award. Nicole, a senior at Marist College, presented her NIMBioS work “Automatic Detection of Rare Bird Species Using Neural Networks” at the Joint Mathematics Meeting in Baltimore, Maryland in January. Her poster was judged as outstanding based on both mathematical content and presentation. Over 300 undergraduate posters were presented during the session. The work used for the poster was completed for a project during the 2013 REU program. Arik Kershenbaum, NIMBioS postdoctoral fellow, advised the project.