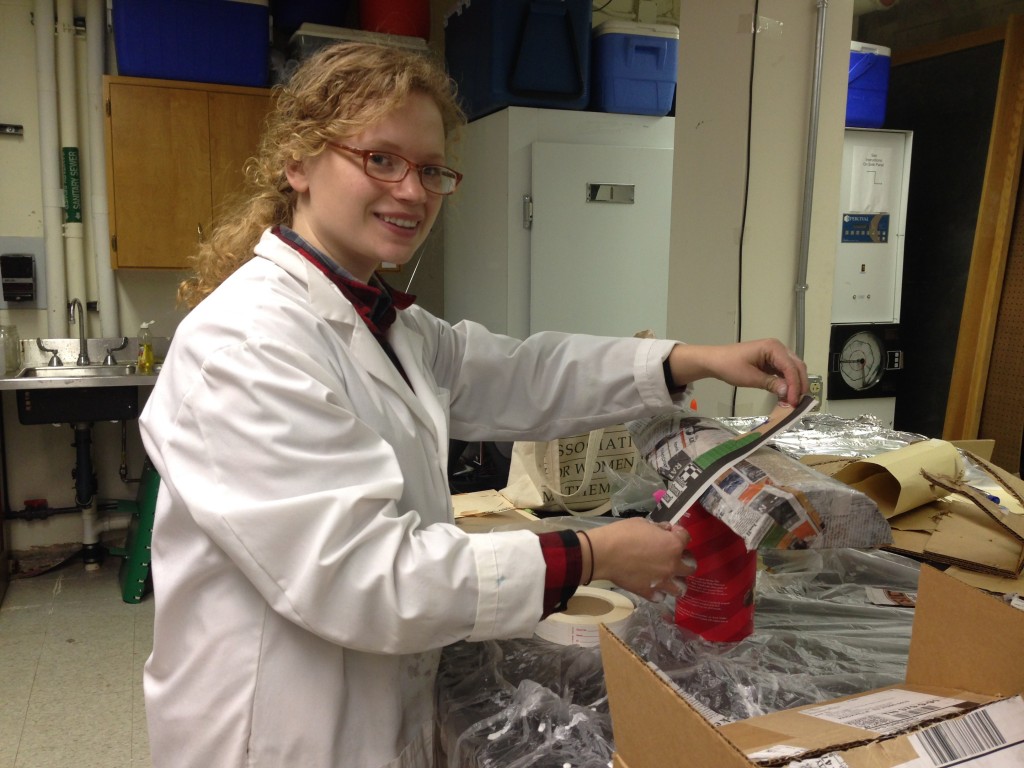 University of Tennessee lab manager Courtney Patterson builds a giant paper mache mushroom for the “Fungus Among US” booth.

NIMBioS and the University of Tennessee hopes to inspire the next generation of innovators at the 3rd USA Science & Engineering Festival Expo and Book Fair, to be held April 26-27 in Washington, DC.

The Festival Expo, which takes place from 9 a.m. – 6 p.m. each day at the Walter E. Washington Convention Center, is a free, family-friendly event that allows kids and adults to participate in more than 3,000 hands-on activities and see more than 100 live stage performances. The event is the grand finale of the Festival’s year-long science celebration.

Taking the entire convention center, the Festival Expo will also have a Career Pavilion, Book Fair—complete with signings by well-known science authors, and multiple competitions such as EPA P3’s sustainability challenge. In all, the Festival, which is hosted by founding and presenting sponsor Lockheed Martin, expects more than 250,000 people to participate.

NIMBioS and UT’s Ecology & Evolutionary Biology Department will collaborate to host a fun, hands-on booth, “Fungus Among Us,” to teach the benefits of fungi. Kids will pretend to be plants exploring the soil, with or without helpful fungi that make getting vital nutrients easier, and the results of timed trials will be graphed. Older kids and families visiting the booth will learn how mathematical models can help us understand how ecosystems work.

“We’ll show thousands of kids and families the exciting things you can discover about the natural world using mathematical thinking,” said Kelly Sturner, NIMBioS Education & Outreach Coordinator, who will help run the booth.

Among its themes this year is a focus on encouraging diversity in STEM careers. Also with more than three million unfilled jobs that require STEM experience, the event is highlighting skills based and “do-it-yourself” professions to emphasize the dire need for skilled workers. In addition, the Festival is showcasing new technologies and their applications.

Founded by serial entrepreneur Larry Bock and Lockheed Martin Chief Technology Officer Ray O’ Johnson to address the severe shortage in science and tech talent, the USA Science & Engineering Festival is the nation’s largest science festival and was developed to ignite the next generation’s interest in considering careers in science and engineering. In recognition of the Festival’s role in making STEM a national priority, Congress recently designated the last week in April as “National Science Week” and made the Festival a focal point.

“Science is amazing…that’s our message to kids and adults attending the Festival. Staying competitive as a nation means we have to encourage more kids to think about careers in science, technology, engineering and math (STEM). What better way to capture their imaginations than gathering the rock stars of science in one place and providing activities they can really do?” explained Larry Bock, Festival co-founder.

To learn more, visit www.USAScienceFestival.org or watch the video at www.usasciencefestival.org/festival-highlight-video.