Posted on April 2, 2013 by Catherine Crawley 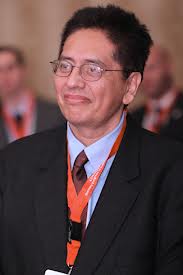 Congratulations to past NIMBioS Advisory Board Member Carlos Castillo-Chavez who has been appointed to President Obama’s 2013 Committee on the National Medal of Science.

Castillo-Chavez will be part of a committee of 12 engineers and scientists appointed by the president to evaluate nominees for the award. “I am grateful that these impressive individuals have chosen to dedicate their talents to serving the American people at this important time for our country.  I look forward to working with them in the months and years ahead,” said Obama in a White House press release today.

The National Medal of Science was established by the 86th Congress in 1959 as a Presidential Award to be given to individuals “deserving of special recognition by reason of their outstanding contributions to knowledge in the physical, biological, mathematical, or engineering sciences.” In 1980, Congress expanded this recognition to include the social and behavioral sciences. Since its establishment, the National Medal of Science has been awarded to 468 distinguished scientists and engineers whose careers spanned decades of research and development.

Castillo-Chavez, a Regents and a Joaquin Bustoz Jr. Professor of Mathematical Biology at Arizona State University, served on NIMBioS’ Board of Advisors from 2009 to 2011. He was also a co-organizer of the NIMBioS Working Group on Synthesizing and Predicting Infectious Disease (SPIDER). President Obama first appointed him to the President’s Committee on the National Medal of Science in 2010.