NIMBioS REUs: The work is done! And has only just begun…

Posted on August 3, 2012 by Catherine Crawley

Members of the evolution of HIV group present their final results. 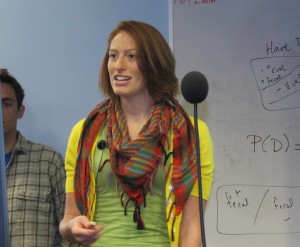 Arielle Nivens from the Salmonella group.

Working closely with NIMBioS postdocs and UT faculty as mentors, each REU worked on one of six different research projects at the interface of mathematics and biology. This year’s projects were modeling the evolution of sexual imprinting; modeling protein translation and genome evolution; developing natural pesticides; modeling Salmonella transmission in swine; agent-based modeling of Johne’s disease; and modeling early evolution of HIV.

For a full listing of all REU participants in the 2012 program and their institutional affiliation, click here. On our 2012 REU page, you will also find more detailed profiles of some of the REU participants. More photos from today’s final presentations, as well as team photos, are on the NIMBioS Flickr photostream.

Congratulations to the 2012 NIMBioS REUs! While your REU experience comes to a close, we wish you well in continuing the research that you began here.

One Response to NIMBioS REUs: The work is done! And has only just begun…