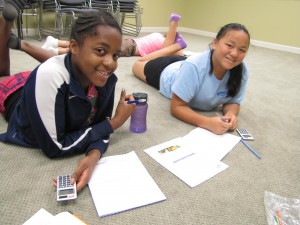 Girls in Science campers at the Great Smoky Mountains Institute at Tremont crunch the numbers to figure out biodiversity.

NIMBioS visited the Great Smoky Mountain Institute at Tremont today to help participants in Girls in Science Camp explore insect biodiversity data. The 21 young ecologists — all middle school-aged girls from North Carolina and Tennessee — had collected various insect data from the Smokies. NIMBioS then led them in an activity to use Simpson’s Index of Biodiversity to compare data from cool and warm-season grasslands in Cades Cove. The girls found the results were a little too close to call: a slightly higher index was found in the cool season grassland, but the potential effects of time of day, time of year, collection techniques, and so on were discussed as areas of introduced bias.

An education module on how to measure biodiversity using Simpson’s Index is available on the NIMBioS website, along with several other modules that connect biology and mathematics.