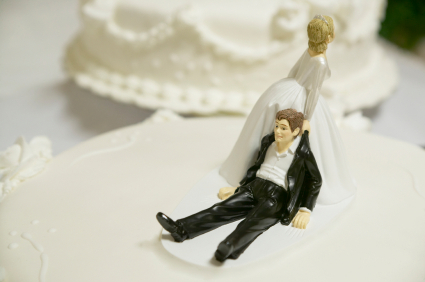 We were pleased to see Sergey Gavrilets’ research on pair-bonding make a splash this week in media outlets around the world. Gavrilet’s paper spurred some interesting, if not spurious, headlines, from “Caring guys and choosy girls led to monogamy” (COSMOS magazine) to “Macho man? Women actually want a provider says study into what created the modern family” (UK Daily Mail), which even included a pithy editorial cartoon on the travails of modern marriage.

Gavrilets’ study showed that female choice in mates played a critical role in human evolution leading to pair-bonding over early times of promiscuity. According to Gavrilets’ mathematical model, the transformation may have occurred when early-hominid females started choosing males who were good providers. The effect is most pronounced in low-ranked males who have a low chance of winning a mate in competition with a high-ranked male. Thus, the low-ranked male attempts to buy mating by providing for the female, which in turn is then reinforced by females who show preference for the low-ranked, “provisioning” male.

The paper, which was embargoed until Monday afternoon, was published in Proceedings of the National Academy of Sciences Early Edition on Wednesday. But once the embargo lifted on Monday, the earliest news reports began appearing by Monday evening. Reporters were able to prepare their copy well ahead of the embargo date as the NIMBioS press release about the study was issued exclusively to reporters via EurekAlert last week. The first media report appeared in the Los Angeles Times online science blog with the headline, “Study traces origins of monogamous coupling.” The LA Times coverage nicely summed up the study, saying the roots of the modern family lie in “weak males with inferior fighting chops and the females who opted to be faithful to them.”

The media stories generated some interesting comments from readers, particularly following the Daily Mail article, about what exactly makes for good “male providers.” While the interpretation of the science and study might be slightly off, the comments about modern monogamy provide some amusement.

Some of the other media outlets in which the study appeared include:

Some of the funnier, and not-quite-accurate headlines, were: