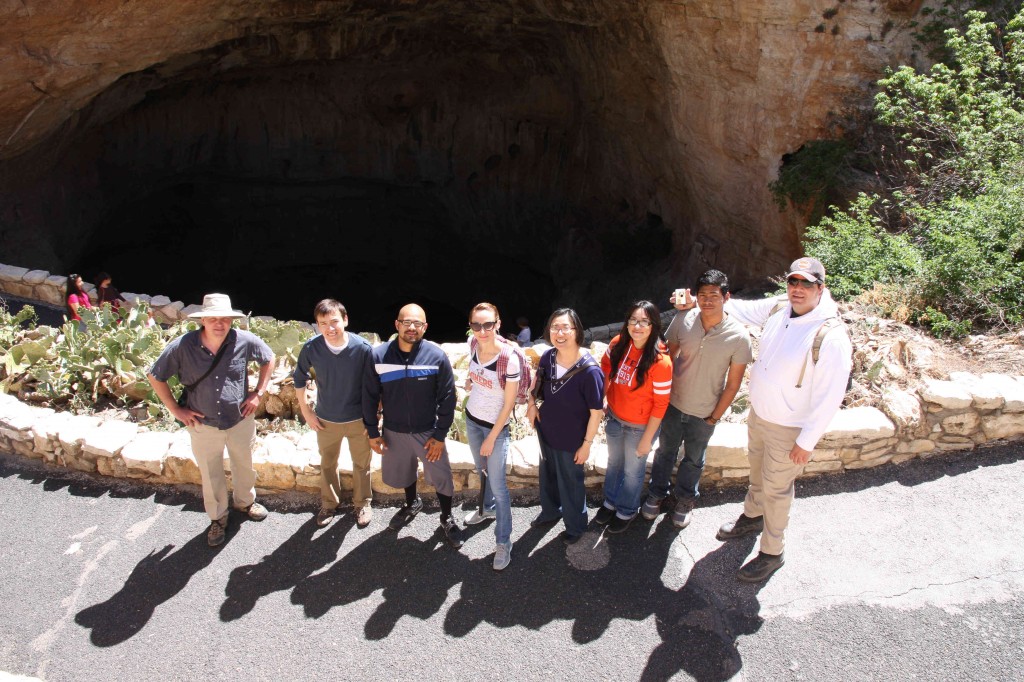 Tom Ingersoll, left, stands outside the main entrance to Carlsbad Caverns with a group of UTEP students and staff. Credit: Clemente Aguilar

NIMBioS Postdoctoral Fellow Tom Ingersoll recently visited the University of Texas-El Paso (UTEP) to share his experiences in bat ecology and modeling by meeting with students and leading a workshop and field trip to Carlsbad Caverns National Park. In Ingersoll’s collaborative workshop, “Introduction to Maximum Likelihood in Hierarchical Models,” undergraduates, graduate students and faculty worked through and shared ideas on how to teach hierarchical models, a concept that allows unbiased estimation of imperfectly observed phenomena (i.e. bat populations). Ingersoll also met a group of undergraduate students informally to talk about their interests and his life as a scientist. Then, Ingersoll led an all-day field trip to Carlsbad Caverns where the group toured the cave, discussed what is known from evidence about the natural history of the area, and witnessed the bats fly out in the evening.

This visit was arranged as a part of NIMBioS’ partnership with UTEP to promote diversity in research and education at the interface of mathematics and biology.

Ingersoll’s research at NIMBioS focuses on developing dispersal and dynamic models for the spread of white nose syndrome (WNS) in bats. Since first discovered in a cave in upstate New York in 2006, WNS has killed an estimated six million bats in caves and mines in North America. New research predicts regional extinctions of the most common bat species, the little brown bat, within two decades due to WNS. Ingersoll is working on three models for the disease. The first is a theoretical dispersal model based largely on simulation, which will inform data collection and disease containment strategies. The second is a map showing calculated probabilities for future spread to help local managers plan for the inevitable arrival of the disease in their area. The final model is a dynamic occupancy model based on collected data that will be used to investigate the environmental covariates of WNS occurrence. More about Ingersoll’s research can be found in this video and feature story.

Carlsbad Caverns is an unlikely site for white nose syndrome because the fungus grows at temperatures below 68 degrees Fahrenheit whereas the Carlsbad bats roost in a part of the cave that is 70 degrees.