The Story of a Scientific Collaboration: How One Nature Paper Came to Be

Posted on March 5, 2012 by Catherine Crawley 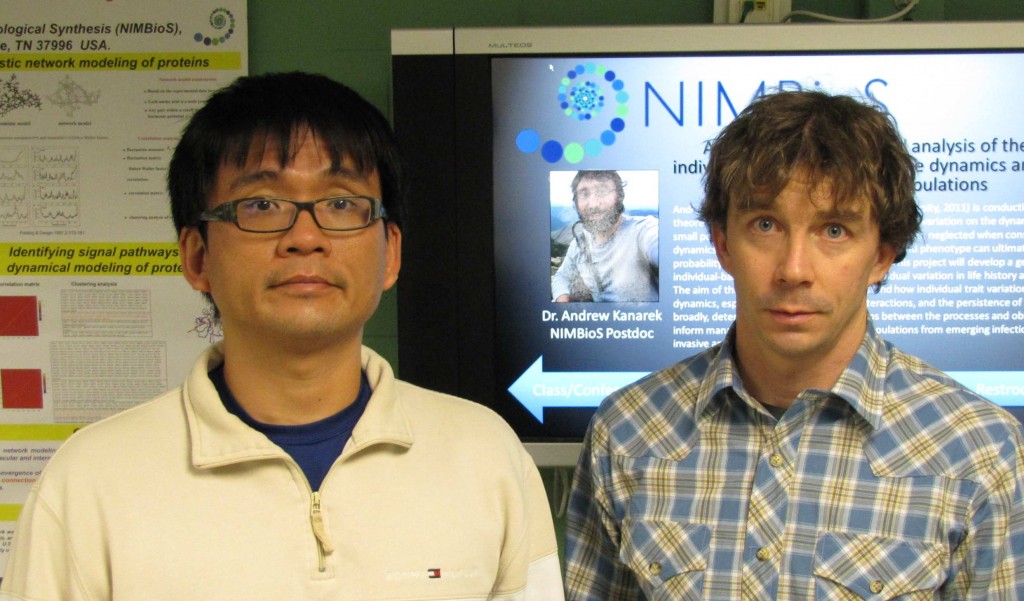 Having a few linear algebraists as co-workers can come in handy — especially near Halloween — when one is stuck on a knotty mathematical biology problem with no clear solution.

This proved to be the case for NIMBioS postdoctoral fellow Tucker Gilman while he was working on a mathematical model to describe coevolution in multidimensional trait space, which has just been published in Nature. It all transpired on one night near Halloween in 2010.

Gilman began working on the problem with his colleague Scott Nuismer at the University of Idaho when Gilman began his postdoc at NIMBioS in the fall of 2010.

“The original plan was to look at two- and possibly three-dimensional systems,” Gilman said. “When we had done the math for two and three dimensions, there was a clear pattern that looked like it would hold for any number of dimensions. This was an opportunity to take the project from the ‘we found something cool in some models’ level to the ‘we discovered something fundamental about the way nature works’ level.”

But then the research team hit a mathematical roadblock: They could demonstrate numerically that the pattern was almost certainly correct, but could not prove the pattern absolutely. In efforts to find the answer, Gilman, an evolutionary biologist by training, talked to numerous math professors and consulted mathematical texts, but to no avail. “I had run into one of those situations where mathematical intuition is not a substitute for mathematical training. I was stuck,” he said.

NIMBioS colleagues to the rescue.

“The ride back was about half an hour long, and I noticed I had three really good linear algebraists in a captive audience,” Gilman explained. “I described the pattern I had seen, and asked them how I might prove it would always hold. We threw some ideas around, but really didn’t make much progress. At least, I didn’t think we had.”

But on Monday morning, Jhwueng, now an assistant professor in statistics at Feng-Chia University in Taichung, Taiwan, had some news for Gilman.

“Tony showed up in my office with a formal proof of the pattern we had talked about,” Gilman said. “It was exactly what we needed to go forward. That was the start of the collaboration. After that, Tony fixed another proof Scott and I were stuck on, and checked the ones I had been able to do myself.”

And so together, Gilman, Nuismer and Jhwueng went on to write the paper and got it accepted for publication at Nature. “I am sure we would have gotten the paper published without the collaboration, but probably not in Nature,” Gilman surmised.

Postdoctoral applications at NIMBioS are reviewed three times per year — March 1, Sept. 1, Dec. 11. Selected researchers are offered positions at NIMBioS where they conduct research that is mostly self-directed. For more information about how to apply, visit http://www.nimbios.org/postdocs