Posted on October 13, 2010 by Catherine Crawley 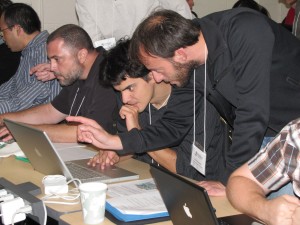 Our classroom is packed to capacity this week with 40 participants attending the NIMBioS Tutorial: High Performance Computing for Phylogenetics. This popular tutorial focuses on how to use TeraGrid, the CIPRES Portal, the iPlant Discovery environment, university clusters, and other typically free HPC resources for phylogenetic analysis. The tutorial is geared primarily toward biologists who are at least moderately experienced with phylogenetic analysis though other researchers, such as statisticians or mathematicians working in phylogenetics, are also participating. The tutorial runs today through Friday, Oct.  15. We are working to record sessions and make them available on the web for those who are interested.