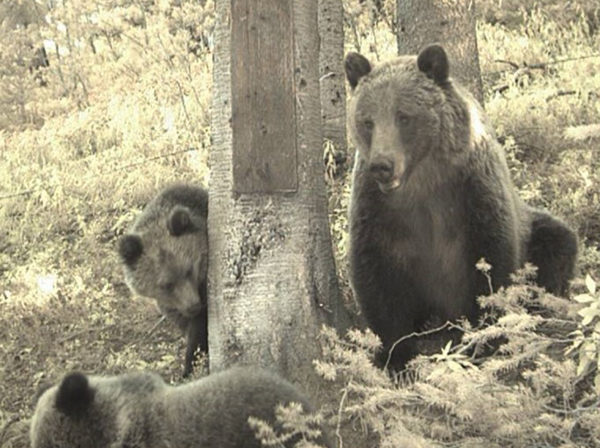 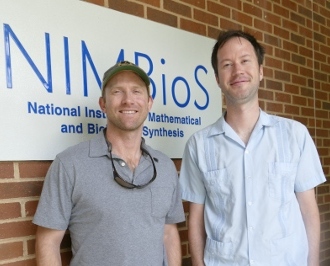 A short term visit to NIMBioS two years ago has resulted in a study showing the effect of climate change on the diets of grizzly bears in Yellowstone.

Lead author Jack Hopkins, an assistant professor of wildlife biology at Unity College in Maine, collaborated on the paper published in PLOS ONE in May with then NIMBioS postdoc Jake Ferguson, now a postdoc in the Center for Modeling Complex Interactions at the University of Idaho.

“Selecting the best stable isotope mixing model to estimate grizzly bear diets in the Greater Yellowstone Ecosystem” finds that although the bears’ staple diet continues to feature whitebark pine seeds, the bears appear to be consuming more plants and berries, probably as a result of a warming climate.

The slow-growing whitebark trees were once ubiquitous in western North America, but are now listed as endangered. Warming temperatures have led to shorter, milder winters, exacerbating beetle infestations and further threatening the trees’ mortality. Other important food sources for grizzlies, such as cutthroat trout and elk, have also declined in the region.

The research team, which also included Daniel Tyers of the US Forest Service and Carolyn Kurle of UC San Diego’s Division of Biological Sciences, focused on modeling the diets of grizzly bears in Cooke City Basin, Montana in the northeast of Yellowstone National Park. They measured stable isotopes in bear hair collected from 2007-2009 to determine what bears had been eating each year.

The findings could be useful in predicting how Yellowstone’s grizzly population will adapt to future environmental change — more important now than ever, as Yellowstone grizzlies are currently being considered to be delisted under the Endangered Species Act.