Posted on March 8, 2017 by Catherine Crawley 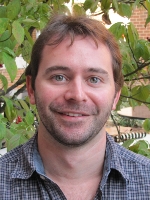 Research on adaptation and climate change by Ryan Martin while a postdoc at NIMBioS appears this month in Science.

The research originated from a working group at the former National Evolutionary Synthesis Center in which Martin participated as a NIMBioS postdoc.

Martin was a NIMBioS postdoc from September 2012 – December 2013. Upon completing his NIMBioS fellowship, Martin accepted a faculty position in the Department of Biology at Case Western Reserve University where he continues today.