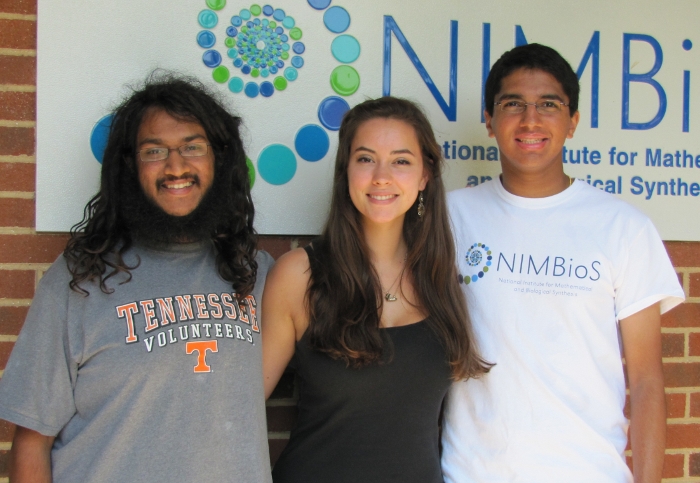 Congratulations to the three students who participated in the 2014 Summer Research Experiences project on mathematical modeling of granuloma formation in Johne’s disease. The team, along with its mentors, has published their results in Frontiers in Microbiology.

“Quantifying limits on replication, death, and quiescence of Mycobacterium tuberculosis in mice” investigates the limits of the rates of bacterial replication, death, and quiescence during Mtb infection in mice. The study found no significant correlation between estimated rates of Mtb replication and death, suggesting the decline in the rates was driven by independent mechanisms. The study also found that the data could not be explained by assuming that bacteria do not die, suggesting that some removal of bacteria from lungs of the mice had to occur even though the total bacterial counts in these mice always increased over time. The study also showed that to explain the data the majority of bacterial cells (at least 60%) must be replicating in the chronic phase of infection, further challenging widespread belief of nonreplicating Mtb in latency.

McDaniel is now a graduate student in immunology at the University of Texas Southwestern Medical School. Her research includes how Mtb triggers a prolonged inflammatory signal.

Krishna is now a junior at the University of Chicago. He is currently a participant in Williams College SMALL Mathematics REU program, studying fluid dynamics and partial differential equations.

Eighteen undergraduates and two high school teachers participated in the 2014 Summer Research Experience at NIMBioS, June 9-August 1. During the eight-week program, participants lived on campus at the University of Tennessee, Knoxville, and worked in teams with NIMBioS postdocs and UT faculty to conduct research at the interface of mathematics and biology. The award included a stipend, housing and some funding to support travel.

More information about NIMBioS’ SRE can be found at http://www.nimbios.org/sre/. Currently, 16 undergraduates are participating in the program, working in teams on five different research projects.