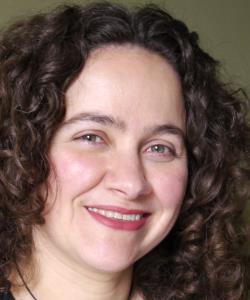 KNOXVILLE — The National Blackwell-Tapia Committee is pleased to announce that the 2016 Blackwell-Tapia Prize will be awarded to Mariel Vazquez, a professor in the departments of mathematics and of microbiology and molecular genetics at the University of California, Davis.

The prize is awarded every other year in honor of the legacy of David H. Blackwell and Richard A. Tapia, two distinguished mathematical scientists who have been inspirations to more than a generation of African American, Latino/Latina, and Native American students and professionals in the mathematical sciences. The prize recognizes a mathematician who has contributed significantly to research in his or her field of expertise, and who has served as a role model for mathematical scientists and students from under-represented minority groups or has contributed in other significant ways to addressing the problem of the under-representation of minorities in math.

Vazquez is a pioneer in an emerging field called DNA topology, which applies pure math to untangle the biological mysteries of DNA. Application areas of her research include cancer treatment, drug design, understanding genome rearrangements after radiation damage or in cancer, and gaining insight into how genomes package in viruses and within cells and into how viral DNA (e.g., retroviruses, such as HIV) integrates into the host genome. Vazquez was an academic visitor in the biochemistry department at the University of Oxford, England, in 2006 and 2007 and was a visiting scholar at the University of California, Berkeley in 2008. Vazquez was an academic visitor at the Cancer Research Center in Salamanca, Spain, and an academic visitor at the molecular biology department in the Center for Research and Development in Barcelona, Spain. Vazquez’s research has been supported by grants from the National Institutes of Health and by the National Science Foundation (NSF). In 2012, she was one of only 96 scientists to receive a Presidential Early Career Award for Scientists and Engineers from U.S. President Barack Obama. She was also the recipient of a NSF CAREER award in 2011 for her efforts conducting innovative research and finding creative ways to integrate research and education.

Vazquez has worked passionately to increase diversity in the mathematical sciences at all levels. As a professor at UC Davis since 2014, Vazquez mentors graduate students, has developed an interdisciplinary course in “Analyzing DNA Structure with Mathematical and Computational Methods,” and has served as co-PI on a grant from the National Security Agency to increase the mathematics and statistics components of the 2015-2016 annual conferences of the Society for Advancement of Chicanos/Hispanics and Native Americans in Science. She has also volunteered for other public outreach, including lecturing for the UC Davis Math Circle for middle and high school students. Before joining UC Davis, Vazquez was on the faculty at San Francisco State University where she mentored undergraduates and graduate students and co-founded the elementary school level component of the San Francisco Math Circles.

The prize will be presented at the Ninth Blackwell-Tapia Conference and Awards Ceremony on Oct. 28-29, 2016, at the University of Tennessee, Knoxville. The conference is co-hosted by the National Institute for Mathematical and Biological Synthesis (NIMBioS) and the Statistical and Applied Mathematical Sciences Institute (SAMSI). The conference includes scientific talks, poster presentations, panel discussions and ample opportunities for discussion and interaction. Participants will come from all career stages and will represent institutions of all sizes across the country, including Puerto Rico.

The idea for a conference honoring Blackwell and Tapia came from Carlos Castillo-Chavez, who was a member of the Mathematical Sciences Research Institute’s (MSRI) Human Resources Advisory Committee and a professor of mathematics at Cornell University at the time. Chavez, now a professor at Arizona State University, secured funding from Cornell for the first Blackwell-Tapia Conference in 2000. The award was established two years later under the leadership of Castillo-Chavez and MSRI Director David Eisenbud. Since 2002, the NSF Mathematical Sciences Institutes have served as conference sponsors and hosts. For the 2016 conference, NIMBioS received a grant from the Alfred P. Sloan Foundation to help support the event. Subsequent conferences were held at MSRI (2002), the Institute for Pure & Applied Mathematics (2004 and 2014), the Institute for Mathematics and its Applications (2006), SAMSI (2008), the Mathematical Biosciences Institute (2010), and the Institute for Computational and Experimental Research in Mathematics (2012).

As recipient of the 2016 prize, Vazquez now joins the selection committee for the next Blackwell-Tapia prize.