Posted on November 24, 2015 by Catherine Crawley 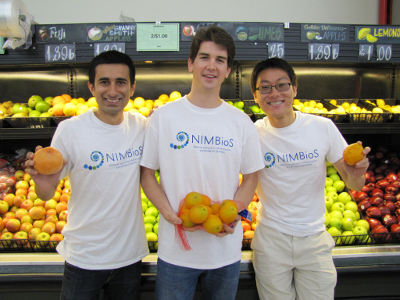 (From L to R) College students Ashish Gauli, Nathan Wikle and Ryan Yan have developed a website tool to help in the fight against invasive species.

Congratulations to Ashish Gauli, Nathan Wikle and Ryan Yan — the three undergraduate students who developed mapping tool ComFlo as a part of their 2015 Summer Research Experience at NIMBioS. The team has been invited to attend the NatureServe EcoInformatics Workshop in Washington, DC, in December.

An interactive website that can be used to visualize the domestic transport of most common commodities in the United States, ComFlo’s chief purpose is to help users track the potential spread of invasive species via shipping routes.

The team entered the tool, integrated with an invasion simulation model, in the student competition to attend the workshop, “Promoting Synergy in the Innovative Use of Environmental Data,” which is co-sponsored by NatureServe and the US Geological Survey with funding from the National Science Foundation. According to the workshop website, the workshop aims “to identify areas of collaboration within the Federal Government and among relevant private sector organizations in advanced uses of environmental data applied to forecasting and decision-making for the sustainability of biodiversity and ecosystem services.”

Each of the students wins a $1,000 travel award as a part of the competition.

ComFlo was as a product of the students’ research on the SRE project, “Ships, Ports, Invasions and Math: Invasive Species Movements through Global Shipping Routes,” with faculty mentors Louis Gross and Dan Simberloff.

As the students began working on their summer project, they discovered there wasn’t a good tool to help visualize the network, so they set out to create it themselves.

“We were really motivated by the fact that we hadn’t found a tool that visualized the data,” said co-developer Gauli, a computer science major at Fisk University. “We really wanted something that was a web-based interactive system where users can change what they want to visualize and drill down big data to the individual level shipping information.”