Posted on October 28, 2015 by Catherine Crawley 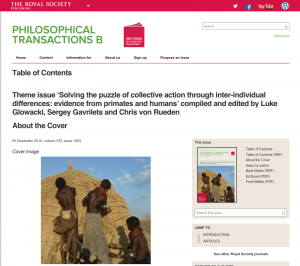 A new theme issue published this week in Philosophical Transactions B was inspired in part by the recent NIMBioS Workshop on Evolution and Warfare.

“Solving the puzzle of collective action through inter-individual differences: evidence from primates and humans” is compiled and edited by Luke Glowacki, Sergey Gavrilets and Chris von Ruedenheon. Glowacki and Gavrilets co-organized the workshop.

The papers contributed to the theme issue evaluate how individual differences affect the propensity to cooperate and how differences can catalyze others’ likelihood of cooperation, the editors write in the introduction.

Included are papers emphasizing the relationship between individual decisions and socio-ecological context, particularly the effect of group size.

A number of papers are related to the topics of the NIMBioS workshop held in September.