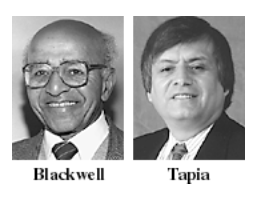 The Blackwell-Tapia Prize and Conference honors the legacy of two trailblazing minority mathematicians.

NIMBioS’ plan to host the 2016 Blackwell-Tapia Conference and Awards Ceremony, an event focused on fostering the careers of minority groups underrepresented in the mathematical sciences, received a big boost this month from a $26,364 award from the Alfred P. Sloan Foundation.

The 2016 Blackwell-Tapia Conference and Awards Ceremony, which NIMBioS will co-host with SAMSI, will be the ninth conference since 2000. The conference is held bi-annually, with the location rotating among NSF Mathematics Institutes. The conference and prize honors David Blackwell, the first African- American member of the National Academy of Science, and Richard Tapia, winner of the National Medal of Science in 2010, two seminal figures who inspired a generation of African-American, Native American and Latino/Latina students to pursue careers in mathematics. The Blackwell-Tapia Prize recognizes a mathematician who has contributed significantly to research in his or her area of expertise and who has served as a role model for mathematical scientists and students from underrepresented minority groups or has contributed in other significant ways to addressing the program of underrepresentation of minorities in math.

Conference planning is now underway! More information about the conference will become available in spring of 2016.