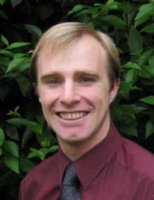 Congratulations are in order for Paul Armsworth who has been named a James R. Cox Professor at the University of Tennessee, Knoxville. Armsworth is NIMBioS Associate Director for Postdoctoral Activities.

An associate professor in ecology and evolutionary biology, Armsworth has been affiliated with NIMBioS as one its senior personnel since 2009 when he was hired as an NIMBioS-affiliated faculty member at UT.

The three-year Cox award will provide Armsworth with a stipend of $25,500 to support his research, which integrates mathematical modeling, statistical analyses, and field surveys. Cox recipients are chosen by a committee for their excellence in teaching, scholarship, and service.

Armsworth follows in the footsteps of another NIMBioS leader who earned the honor, namely NIMBioS Director Emeritus Louis Gross. Gross used the award to help fund the NIMBioS Songwriter-in-Residence program. Cox was interested in environmental issues and music.