Posted on February 13, 2015 by Catherine Crawley 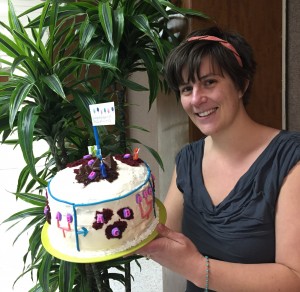 Dr. Peace and her winningest cake.

NIMBioS postdoc Angie Peace knows a little something about food web dynamics, and she also knows how to make the best kind of food: cake! Peace’s cake took 1st place this week in the Biogeography Cake Contest for UTK’s Darwin Day.

Judged on taste and scientific merit, Peace’s cake had four circular layers of alternating chocolate and red velvet with creme cheese frosting. The theme was biogeographical phylogenetics. Four different panels around the sides of the cake illustrated evolution through time with small cake islands for continents and red liquorice for phylogenetic trees. Toblerone chocolate served nicely as mountains on the top. Peace won $50 for her cake.

As a NIMBioS postdoc, Peace uses mathematical modeling to determine the effect of phosphorus pollution from fertilization run-off on the food web dynamics of freshwater lakes.

She confesses to being a life-long baker, and she is often asked to bake birthday cakes for friends. “When I was a kid, I always wanted an Easy Bake Oven, but my mom wouldn’t let me get one and so I had to use the real oven instead,” Peace said. Apparently, the lessons learned in the kitchen at a young age paid off.