Biology in a Box Aligned to Mathematics Common Core 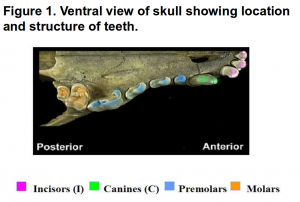 In the “Of Skulls and Teeth” unit, there are many activities involving the counting, classifying and measuring of different aspects of animal skulls, including teeth, in order to better understand the adaptations of organisms.

Teachers of K-12 looking for hands-on, memorable enrichment activities for teaching the Common Core State Standards in Mathematics need look no further — the alignment for Biology in a Box is now complete and published online.

Forty-five states, the District of Columbia, and four U.S. territories have adopted the Common Core State Standards in Mathematics (CCSSM). The effort to draft new K-12 curriculum standards in both mathematics and language arts was led through the cooperation of many state government agencies, including the National Governor’s Association and the Council of Chief State School Officers. As the CCSSM emphasizes mathematical practice skills of problem solving, critical thinking and modeling, many of the quantitative, inquiry-based activities in Biology in a Box give students opportunities to apply their mathematical thinking skills to scientific questions. Activities involving probability and statistics are also found in the boxes, with applications to genetics in the “It’s in Your Genes” unit and to visualizing and quantifying variation found in nature in the “Everything Varies” unit.

In this example of possible student work from the “Of Skulls and Teeth” unit, the objective is to use graphing skills and calculating proportions to visualize the distribution of teeth types in different organisms.

The effort to incorporate quantitative activities into Biology in a Box began when NIMBioS began collaborating with the long-running University of Tennessee outreach program in 2009. Since then, all 10 units on themes ranging from “Fossils” to “Behavior” have been revised to incorporate quantitative thinking, aligned to the then-current Tennessee math standards. During the 2013-2014 school year, Tennessee is finishing a full transition to the CCSSM. VolsTeach undergraduate intern Kelsey Bratton recently completed the project to update the Biology in a Box standards alignment to the Common Core. We are excited that this means the activities can more easily be integrated into math classrooms throughout the country.

All Biology in a Box activity books are freely available online. Currently the boxes with materials are in over 90 school systems in the state of Tennessee as well as several surrounding states.