Teaching Science in a Climate of Denial at Tennessee Teacher Conference 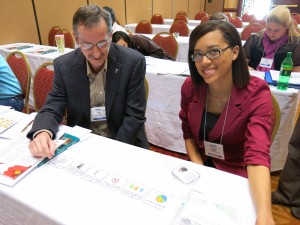 Social controversy surrounding certain scientific theories poses a great challenge for teaching science in the United States — up to 60 percent of U.S. high school biology teachers report capitulating in some way to antievolution pressure, reports one study. NIMBioS and Darwin Day Tennessee are working with local teachers to help build a community of support for teaching the “hot topics” of evolution and climate change in Tennessee.

In November, NIMBioS and Darwin Day Tennessee co-organized a session at the Tennessee Science Teacher’s Association (TSTA) annual professional development conference in Murfreesboro, TN to help teachers develop strategies for how to teach science while also giving students space for their own cultural identities.  Efforts to support teachers in teaching socially controversial science are needed more than ever. In the study mentioned earlier and featured in a 2011 column in Science, of 926 high school biology teachers surveyed nationwide, only 28 percent teach evolution as a well-supported fundamental idea of science, 13 percent openly support teaching intelligent design in the classroom, and 60 percent fall in between. According to the survey, these “cautious 60 percent” employed a number of capitulating strategies, including avoiding teaching evolution altogether, calling evolution by another name (such as “change over time”), telling students that they only teach it because it’s required, teaching molecular evolution but not speciation, or telling students they can “believe” whatever they want. Many of these cautious teachers did not hold young-Earth or creationist beliefs that would prevent them from teaching evolution, but instead lacked an exceptional understanding of evolutionary biology. The study thus recommended that strengthening teachers’ understanding of evolution could help strengthen their confidence in teaching it. 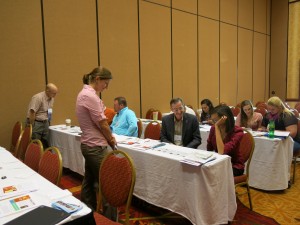 At the TSTA conference session, “Teaching Science in a Climate of Denial,” ideas were presented to combat anti-evolution pressure in the classroom. Real-life scenarios, such as a student who bases an exam answer on religious or political beliefs, were used to spark ideas about how teachers can respond to such students or about how teachers can respond to similar pressure from administrators. Teachers discussed the importance of pointing to state curriculum standards, on which state achievement tests are based, to convince reluctant administrators, parents and students that what they are teaching is indeed the required content for science class. In addition, teachers discussed different ways to initiate class discussions on the nature of science, allowing students to grasp how it is different from other ways of understanding the world, such as philosophy or religion. By allowing students the opportunity to draw these distinctions early in the school year, the teachers said that students monitor themselves and each other to keep science class discussions rooted in scientific evidence and principles and without veering off into personal beliefs or opinions.

Teachers in the session also played a “Science Rejection Card Game” which involved arranging a series of scientific principles (from “The Earth is Round” to “Hand Washing Prevents the Spread of Disease”) in the order in which they think they are controversial among the public. Teachers matched each principle with a famous rejector of the science, discussing why the person may have chosen to not accept it and consequences of their rejection. Famous anti-vaccination advocate Jenny McCarthy was one example. The teacher who created the activity pointed out that by making this an open class discussion, her students came up with all kinds of reasons for why people reject science that had never occurred to her before and are able to distinguish between personal motivations and arguments based on science. Another teacher pointed out that such discussions are great opportunities to discuss bias with students, thus covering an important Tennessee curriculum standard. 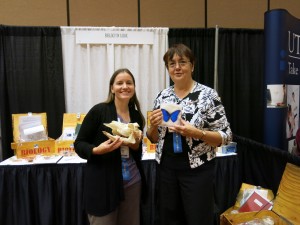 NIMBioS did a lot more at the TSTA conference this year to promote science and math education. Sturner also led a session titled “Modeling a Forest” based on an activity she designed at NIMBioS and published in Science Scope earlier this year. Teachers went outside to measure the diameter of tree trunks and describe how their students could measure tree height and crown diameter to mathematically model trees. Biology in a Box materials were also exhibited.