Posted on November 26, 2013 by Catherine Crawley 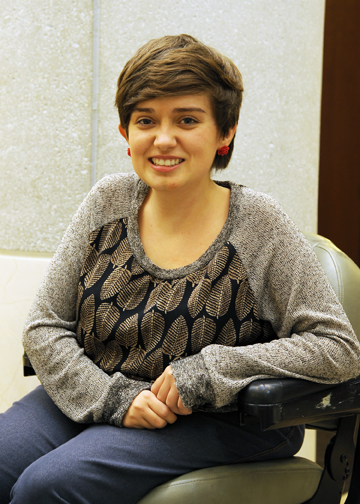 Congratulations to former NIMBioS REU Lindsay Lee who will begin graduate studies at Oxford University next year as a 2014 Rhodes scholar. Lee plans to apply the mathematical modeling that she learned as a participant in NIMBioS’ Summer Research Experiences (SRE) program to analyze disparity in health care.

“Working at NIMBioS first taught me what modeling is and how it can be used, and I’m so excited to expand on that preliminary knowledge at Oxford,” Lee told NIMBioS today. “Mathematical modeling is used constantly in public health applications. As an example, in epidemiology modeling is used to track diseases or behavioral changes that affect health outcomes. I want to use mathematics to analyze and design effective health care interventions and policies that are meant to help marginalized groups, such as people with disabilities.”

Diagnosed with muscular dystrophy as a young child, Lee knows firsthand the challenges faced by people with disabilities and wrote a moving personal essay about it, which was published in 2011 in Thought Catalog.

Lee, along with 32 other American students, was selected as a Rhodes scholar from 857 applicants. An annual class of 83 scholars from all over the world is selected on the basis of intellect, character, leadership and commitment to service. The postgraduate award, valued at about $50,000, covers all university and college fees, a personal stipend and one round-trip airfare to and from Oxford.

While at NIMBioS, Lee was part of the research team that modeled feral cat population dynamics in Knox County. The results were designed to help local and national animal shelters make decisions about their population control programs. Lee described her NIMBioS research experience in this NIMBioS Q&A. Her work was also featured in this video describing the program.