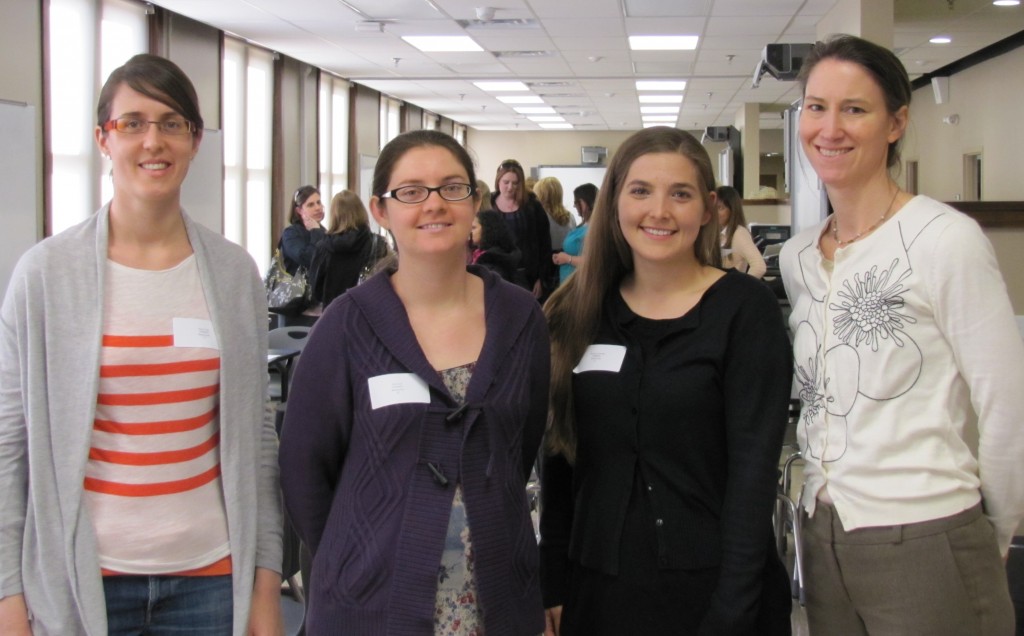 With less than 25 percent of STEM (science, technology, engineering, and math) jobs in the United States currently held by women, women researchers and faculty from NIMBioS hoped to change that sobering statistic and inspire young girls from the L&N STEM Academy at the first ever STEM Breakfast held there on Wednesday.

NIMBioS postdoctoral fellows Julia Earl, Anna Michelle Lawing, and Maud Lelu, along with NIMBioS Associate Director for Graduate Education Alison Buchan, were among the 48 local women in STEM careers who were invited to shared their science stories and career advice with the high school girls. After breakfast, the high schoolers rotated among tables to conduct “speed interviewing” of the STEM professionals, who started with 90-second elevator talks about themselves and their careers. Then, the girls asked questions and engaged in conversations to network with the women. 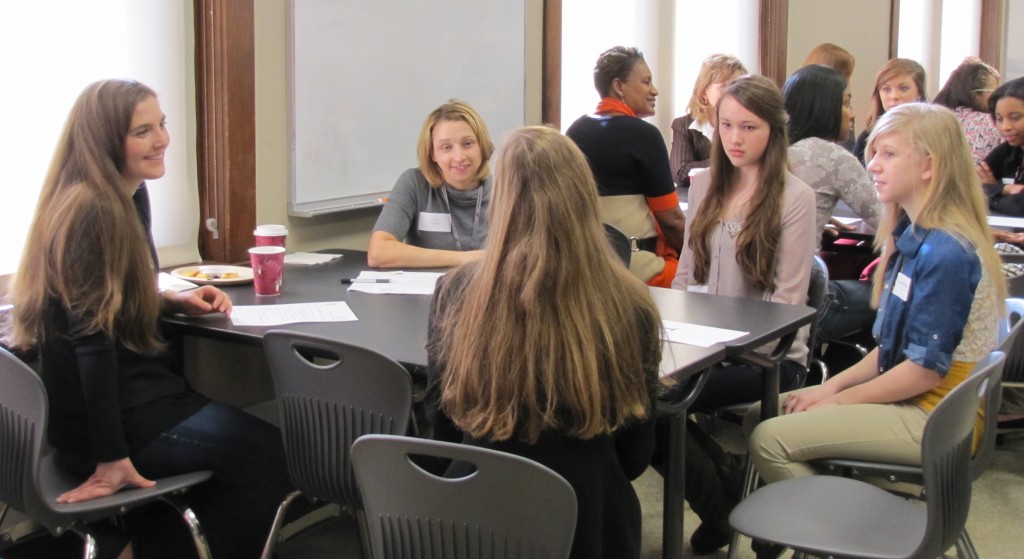 The event, which was attended by about 50 female students at the STEM Academy, was designed to “start the awareness of what’s out there” for STEM careers, said organizer Mark Smith, Dean of STEM at the high school.

A 2011 U.S. Commerce Department report said that American companies urgently need professionals trained in science, technology, engineering and mathematics (STEM) fields, but there are not enough workers with the necessary skills and too few Americans earn post-secondary STEM credentials. And although women fill close to half of all jobs in the U.S. economy, they hold less than 25 percent of STEM jobs.

Not only is there a dearth of women in STEM jobs, more than half — 52 percent — leave when they hit the “mid-level” point in their careers, more than double the quit rate for men, according to a 2008 Center for Work-Life Policy study. The researchers cite factors that they call “antigens” that repel women, including hostile macho cultures, isolation, lack of mentors, poor work-life balance, and financial as the reasons. The ever-present income gap doesn’t help: In 2008, women in tech fields earned an average salary of $70,370.21. Over the same time period, men’s salaries averaged $80,357.

“I really wanted the high school girls to see that there are women out there doing all kinds of math and science for their jobs and that we are really excited and passionate about our work,” said Earl in explaining why she participated in the event. “The media often portrays science in a very narrow way.  It was great to see so many women working in many different disciplines and at the interfaces between those disciplines sharing what they do with high school students.”

Earl echoed what other women in STEM fields are saying — there is a noticeable lack of mentors, especially role models who have successfully navigated their careers while raising children. “I’ve never seen a woman with small children obtain tenure at a research university, a challenge I will be undertaking in just a few years. I think it’s hard to be sure you can accomplish something without having seen at least one person go through the same type of challenge,” she said.

The L&N STEM Academy, located in the restored historic L&N train station and depot in downtown Knoxville, is a public magnet school that opened in 2011. High school students from throughout Knox County are eligible to enter a lottery to attend. STEM permeates the school’s curriculum, even into English classes where students read and discuss Mary Shelley’s Frankenstein and Ray Bradbury’s Fahrenheit 451.

For more pictures from the Girls in STEM breakfast, check out the NIMBioS Flickr photostream.

Maud Lelu (right, facing) tells her story to a group of high school girls at one of many tables during this big event.