Posted on November 2, 2012 by Catherine Crawley 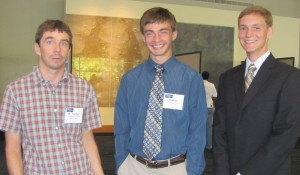 Two local high school students have been named regional finalists in the 2012 Siemens Competition in Math, Science & Technology with a project on sexual imprinting that they completed at NIMBioS under the guidance of former postdoc Tucker Gilman.

Dalton Chafee and Hayes Griffin, both seniors at Bearden High School, spent several hours each day last summer at NIMBioS working on their project with Gilman, who is now a Lecturer in Environmental Science in the Faculty of Life Sciences at the University of Manchester, UK. The students used a combination of analytical models and individual-based simulations to study the conditions under which sexual imprinting can evolve, as well as specific strategies that should be expected to evolve in nature.

The Siemens Competition awards one $3,000 prize to an individual and one $6,000 prize to a team at each regional competition. Winners of the regional events advance to the National Finals at The George Washington University in Washington, DC, on Dec. 1-4, where $500,000 in scholarships will be awarded, including two top prizes of $100,000.