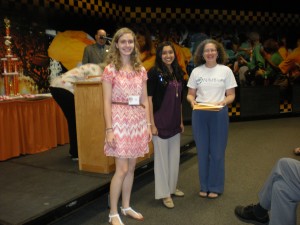 NIMBioS sponsored two awards for biological research projects using mathematical methods at this year’s Southern Appalachian Science & Engineering Fair. Samiha Ahsan and Ashley Parks, both of Oak Ridge High School, share the senior level prize for their project “Mathematical Modeling of the Diffusion of Cells Through Arterial Walls.” Ahsan became interested in the project because of her interest in life science, and Parks because of her interest in mathematics. 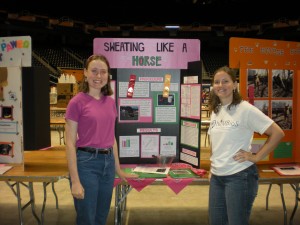 The junior level prize went to Lily Turaski of the Blount Home Education Association for her project “Sweating Like a Horse”, where she explored her question of whether horses of darker colors sweated more in the sun to control their body temperature. Turaski demonstrated an advanced understanding of the statistics she used to determine whether her hypothesis was validated. 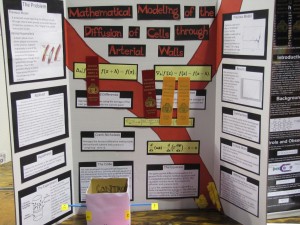 The senior prize-wining project, "Mathematical Modeling of the Diffusion of Cells through Arterial Walls"