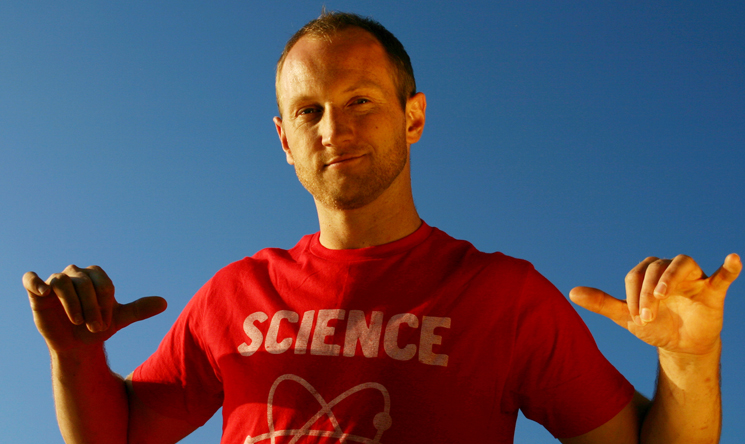 NIMBioS is pleased to announce that educational hip-hop artist Baba Brinkman will be joining NIMBioS as its new Songwriter-in-Residence in April and May.

Brinkman is a Canadian rap artist, writer, actor and tree planter. He is best known for his award-winning shows The Rap Canterbury Tales and The Rap Guide to Evolution, which interpret the works of Chaucer and Darwin for a modern audience.

Brinkman is also a former tree-planter who worked in the Rocky Mountains every summer for more than ten years, personally planting more than one million trees.

Brinkman has a master’s degree in medieval literature from University of Victoria, Canada. His thesis drew parallels between the worlds of hip-hop music and literary poetry.

He has written or co-written five hip-hop theatre shows, winning several awards while performing six full seasons at the Edinburgh Fringe Festival. His Canterbury Tales adaptation earned a sponsorship as a “Literary Ambassador to Schools” from Britain’s Cambridge University English Department in 2005. Brinkman has performed for more than 100 high school and college assemblies from Hong Kong to Australia to Alabama.

At UT, he will perform an excerpt from his Rap Guide to Evolution, which recently finished an extended off-Broadway run. The Rap Guide to Evolution won the prestigious Scotsman Fringe First Award in Edinburgh in 2009, and went on to tour the USA, Australia, and the UK, including three appearances at regional TED conferences and a performance on national TV on The Rachel Maddow Show.

The free performance is scheduled from 7:30 – 9 p.m., Tuesday, April 24, in the UC Auditorium. Brinkman’s DJ “Mr. Simmonds” will join him for the performance.

You can read more about Baba and his art in this New York Times article, “Paying Homage to Darwin in an Unconventional Format: Rap.”