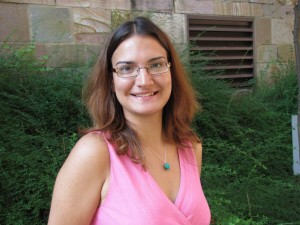 Dana-Adriana Botesteanu, a participant in NIMBioS’ 2011 REU program, has won an “Outstanding Presentation” award from the Mathematical Association of America for her poster at the Undergraduate Poster Session at the 2012 Joint Mathematics Meetings. Botesteanu’s poster presentation, “How does the effort that a mother bird expends on her offspring depend on the attractiveness of her mate?” was rated within the top 15% of more than 300 posters. The research stemmed from Botesteanu’s research at NIMBioS during the REU program. Botesteanu, a mathematics and French major at Mount Holyoke College, describes her research in this NIMBioS video about REU. Mentors for the team project were Dr. Tucker Gilman, a current NIMBioS postdoctoral fellow, and Dr. Tony Jhwueng, former  postdoctoral fellow at NIMBioS. Other 2012 winners are listed here. Congratulations, Dana!