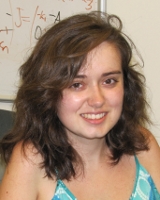 “I’ve learned so much, and it really feels like the research we’re doing is going to have a major impact. It’s not often I get to feel that way about my work,” said Lindsay Lee of her summer spent at NIMBioS as a participant in our 2011 Research Experiences for Undergraduates (REU) program. Lee, a mathematics and Spanish major at the University of Tennessee, Knoxville (UTK), was one of 16 undergraduates who participated in the eight-week program, which also included five veterinary students and one high school science teacher. The students lived on campus and worked in teams with NIMBioS postdocs and UT faculty to conduct research. The six research projects for the 2011 program were modeling feral cat populations, modeling E. coli in cattle, investigating maternal investment in the offspring of bird species, modeling intracellular movements in plants, modeling the effect of essential oils on a biocontrol fungus, and modeling the early dynamics of simian immunodeficiency virus. Profiles of six of the participants have now been posted on our website. Read what Lee along with Tiffany H. Blankenship (biology major, Univ. of Texas, El Paso); Dana-Adriana Botesteanu (math and French major, Mount Holyoke College); Rojin Chitrakar (biology major, Eastern New Mexico Univ.); Rachel Johnson (veterinary graduate student, UTK); and Krista Schaefer (math major, Valpraiso Univ.) had to say. More information about the REU and the Research Experiences for Veterinary Students (REV) program can be found here. We will begin taking applications for the 2012 program in December, so watch our website for the announcement!