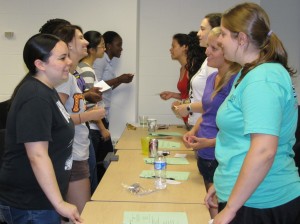 The biggest barrier to networking is overcoming shyness, but practice helps, according to Brian Roe, Trainer for UT Employee and Organizational Development.  Roe gave networking tips in a recent training session for students in the NIMBioS REU/REV program and the BCMB REU program. In “Meeting People: A Guide to Effective Networking,” Roe defined networking as “the ability to create and maintain an effective, widely based system of resources that works to the mutual benefit of oneself and others.” Roe demonstrated how networking will help them achieve career goals by having the students consider how networking may have already led them to their current internship.  After learning some strategies for meeting new people and exchanging contact information, students put the knowledge into practice by mingling and networking among themselves. This is the final week for the NIMBioS REU/REV program, which will culminate with students presenting their final research talks on Thursday and Friday.