NIMBioS Welcomes Songwriter Who Aspires to be ‘Jane Goodall of Music’ 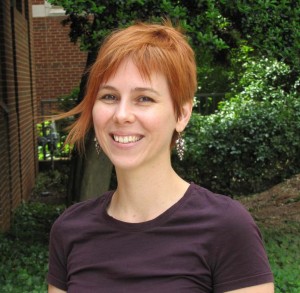 NIMBioS welcomes singer-songwriter Kay Stanton as NIMBioS songwriter-in-residence for the month of May. Stanton, who lives in Athens, Ga., has been writing and performing since 1995 and started her main band, a pop and experimental rock and roll band called Casper and the Cookies, with her husband Jason in 1999. She sings vocals and plays drums and bass. The band has toured extensively in the US, Canada and Japan and has opened for the B-52s. Stanton, who has a B.A. in art and biology, said in applying for the residency, “…I feel it is extremely important to have positive female role models both in science and music, often still male-dominated fields. Jane Goodall has been my idol since 1980. I’d love to strive to be the Jane Goodall of music.” Stanton is the final of four resident songwriters at NIMBioS this academic year. We’re excited to have Stanton’s musical talents at NIMBioS this month! For more information about the NIMBioS Songwriter-in-Residence program, click here.