Posted on January 5, 2011 by Catherine Crawley 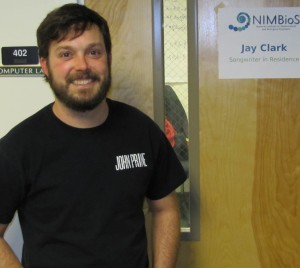 We’re excited to have Americana musician Jay Clark as NIMBioS’ Songwriter-in-Residence for January. Not only is Jay a talented songwriter and musician, he’s got a Ph.D. in wildlife ecology as well. Might come in handy around NIMBioS. Clark has been a part-time wildlife researcher for the Department of Forestry, Wildlife and Fisheries at UTK. Jay’s research has involved black bears in the Great Smoky Mountains National Park and the blight of the American chestnut tree. In an article in the Huntsville (Ala.) Times, Jay said nature inspires many of his songs. Originally from Winchester, Tenn., Jay mixes folk with bluegrass and has released three albums. You can read more about Jay at his website: www.jayclarkmusic.com