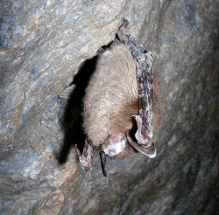 First the good news: NIMBioS was pleased to see Winifred Frick’s research published in Science, Aug. 6, 2010. The lead author of the Science article (Frick) along with several other authors were at the first gathering dealing with modeling of white-nose held here at NIMBioS in June 2009. The Science Perspective on the topic is by Peter Daszak, who regularly participants in several NIMBioS activities. The bad news is of course that one of the most common bat species in North America, the little brown bat, now faces extinction (within 16 years) from white-nose syndrome, which has already killed a million bats in the northeastern U.S.